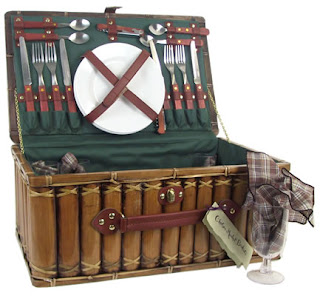 I must confess that I seem to have murder on my mind as of late. When I discovered my old musical comedy teacher from college was to portray Miss Marple in Agatha Christie's classic play A Murder is Announced at the Cortland Repertory Theater, my own plot began to thicken. I offered to go over her lines with her on an afternoon, and then naturally what else to do? A picnic was soon announced as I set forth to compose a dastardly basket--of murder!

Recollections of years past and people poured forth, as we dined in her apartment mid-town, before getting to work on her lines. I first took out a heavy candlestick from the basket, as many murders require a blunt instrument. Here it was used just to eat by some inspiring candlelight. The actual menu began with sparkling cyanide (it was really only fizzy pink lemonade) and a drop of poison. For the latter, I filled an old apothecary bottle with Jim Beam Devil's Cut bourbon and labeled it POISON XXX with a marker and adhesive tape. Indeed 90 proof was in the poison! My Surprising Tuna with capers took their involvement in the proceedings as we were on quite a caper. Roasted sliced potatoes with parsley were served with mushrooms that we grilled for information. Fried chicken was executed as well because of course, it was a picnic. Pepperidge Farm Brussels cookies followed for dessert out of respect to our favorite Belgian detective Hercule Poirot, along with Ciao Bella blood orange sorbet for a particularly sanguine conclusion. A box of English Breakfast tea was left for the hostess to help her prepare for her role as she steps into Miss Marple's formidable shoes.

A great afternoon perfectly suited for a great lady! Thanks for the privilege CLB!
Posted by Peter Sherwood at 11:16 AM