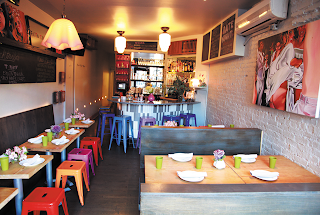 I just loved this place!

Upon entering tiny seater Fatta Cuckoo, we felt as if we had jumped into the Magic Screen from Pee-Wee’s Playhouse. As the mere name might imply, the space itself is quirky, whimsical and fun, assembled by proprietress Leah Tinari with her own broadly imagined paintings hanging on the whitewashed-brick walls. The food is a delight, as handled by chef Matias Hernandez. It’s stuff that everybody likes but  doesn’t descend to ordinary comfort food. Tinari glows with passion about her food and art, and it emanates from her as she dotes upon the engaging premises. An amusing, explanatory anecdote: when Tinari was a child, her Italian nonna used to tap her belly with a gentle forefinger after eating an exhausting meal and coo, “Fatta cuckoo!”

Over a groovy soundtrack featuring old-school hits, the cocktail list further inspired our imaginations, particularly the special T-Party cocktail with Espolòn tequila, spiced honey, Lillet and bitters. What could have been a blithely loathsome brunch drink, the St. Rose was actually a very solidly balanced cocktail with vodka, St-Germain liqueur, Aperol, orange bitters and a float of prosecco. We also took more than a few sips of a blood-orange screwdriver with vodka, muddled basil, a breath of lime and a splash of soda water.

We ordered a cream-filled ball of burrata cheese, plucked from Saxelby’s in the nearby Essex Street Market. This beauty was domestically crafted in Philadelphia and the day’s preparation included mint and pistachio pesto with a chiffonade of basil and a touch of olive oil, served with cranberry-walnut crostini. We were curious about the calamari—stuffed with braised short ribs!—but moved on to a plate of ravioli filled with whipped ricotta, shiitake and cremini mushrooms in a mushroom cream sauce tied up with thyme and offered like little presents with wonton skins as wrapping paper.

It took about three seconds of scouring the menu to realize we had to have the fried chicken, which turned out to be incredibly juicy—brined and battered and served with a ladleful of sharp Gorgonzola, celery root purée, house-made hot sauce and a prickly side of carrots and celery, all in homage to classic roadside chicken wings. We paired this up with red Swiss chard sautéed on an amiable plate of frizzled bacon and golden raisins. Seriously crispy pork was furthered by a fanciful blueberry barbecue sauce, an earnest cornbread cake and slivers of slaw. We plundered the mushy potato puffs, or elevated Tater Tots, if you will.

Keeping it in the family, Tinari’s mother lends a hand with Mom’s Desserts, which she actually makes. We’re talking brightly zesty yet delicate Key Lime pie; cream cheese cheesecake with a graham cracker crust that had us at OMG; and a Grasshopper Mousse that screamed for a ’70s dinner party with crème de menthe, a fluff of the freshest whipped cream and a dusting of chocolate sandwich cookie powder. We rolled over all of them, enjoying every bite that we could manage, as we’d been pointing at our bellies for quite some time.

Even after the sugar rush subsided, what could we say? We’re cuckoo for…

Short Order: Comforting food for everyone served with a refined side of whimsy in a relaxed, charming atmosphere.
Peter’s Picks: T-Party tequila cocktail; vegetable ravioli; fried chicken; Mom’s Desserts
Peter’s Pans: Venturing to the Lower East Side and then trying to find where on earth the restaurant was!
Prices: Appetizers: $10–$15; Entrées: $16–$21; Alcohol: wine, full bar, specialty cocktails.

Photo credit: Gustavo Monroy.
Posted by Peter Sherwood at 8:43 AM