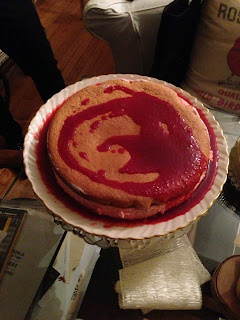 I freely admit that I was a little nervous about making this incredibly gorgeous Raspberry Charlotte as a suffix to our dinner that accompanied a reading of Clare Booth Luce's classic play, The Women. This distinctly female "no boys allowed" creation was read mostly by us boys. Hilarity ensued as we tackled all 22 roles. Bowls of smokehouse almonds and cocktails got us started. Befitting the glamour of another era, I served a watercress salad with Annie's Shiitake & Sesame vinaigrette and buttered Parker House rolls, all of which went quickly. Classic London Broil (a few slabs shown here) served as the main before our entrancing dessert. 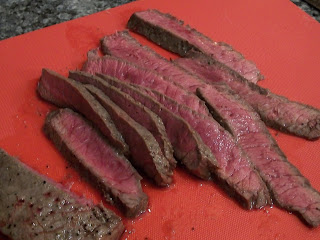 Raspberry Charlotte is a delicate confection consisting of lots of whipped meringue that at any moment just may surrender itself to the food gods and keel over, at least so I thought. I made it the day before as it has to sit, refrigerated overnight, to relax. My charlotte was a total success and boy, did I feel proud, having executed it properly. A Kitchen-Aid mixer is essential to avoid so much exhausting hand-whisking to form the stiff peaks for the cake! And homemade whipped cream! We did not have eau-de-vie de poire as the recipe suggests but used instead kirsch (the cherry version) that we did have on hand for further flavor.

Here, the 9 cups of frozen raspberries are duly dosed with 3/4 cup sugar before filling the cake. Above is the finished result, drizzled with the berry puree. 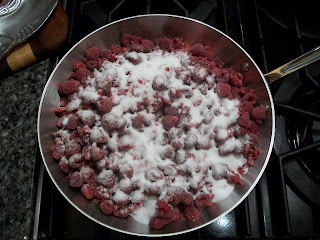 To the table! Pearls and a gossipy tea set ripe for conversation! 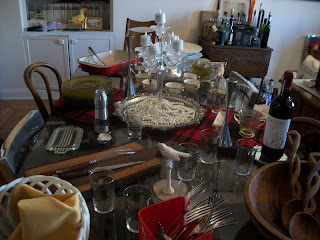 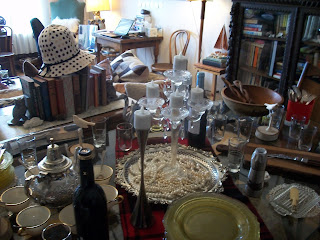 A view of the Raspberry Charlotte pillage! Isn't that a brilliant color? 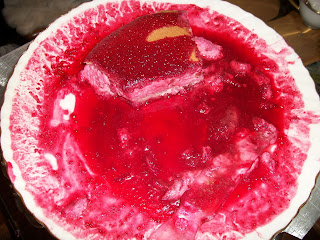 Another glimpse of the table as our evening settled in. 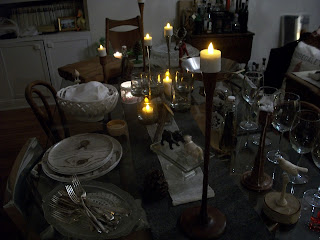 Soundtrack: Noel Coward, The British Bands; Flapper Favourites, Music from the 1920's; Miss Pettigrew Lives for a Day
Posted by Peter Sherwood at 10:36 AM