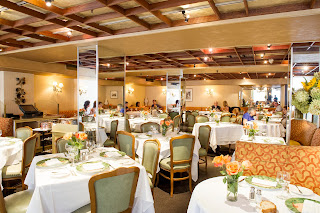 
Filled with the spirit of the holidays, we whisked ourselves away to Le Périgord, situated in a comfortable, quiet nook just northwest of Beekman Place. There, we encountered a warm welcome from the gracious maître of the manor and an arsenal of waiters sporting starched white jackets with napkins draped over their regimented forearms. Plump roses in full bloom quietly graced the tables as we were seated at our banquette. What a way to come in from the cold! From there we watched longtime patrons  from the neighborhood sweep in, mostly women of a certain age bathed in black sable, and the host greet every one of them with a firm handshake and an air of recognition.
I toyed with a Grey Goose martini and my fella relaxed into a full-bodied red Gigondas while we slathered butter on civilized slices of brioche, anticipating the cuisine of longstanding chef Joel Benjamin, whose impressive résumé includes time at legendary restaurants Lutèce and La Côte Basque.

However, my ears soon pricked up like a rabid pinscher and my mood swiftly changed at the piercing death rattle of a confused, brittle fussbudget who apparently was contemplating strychnine over selections from the prix-fixe menu. We moved tables straightaway (which is something I never do), far across the room, as assisted by our equally aggrieved server. It hardly mattered anyway as we ended up dining with a better view of the moneyed complacency in attendance; what Tom Wolfe coined, in part, as “social x-rays.”

Frogs’ legs were game little leapers accompanied by a perfectly delicate risotto flavored with aromatics. Roasted lobster claws topped the hefty, buttery-soft lobster tail with pale strands of enoki mushrooms. It was surrounded by a medley of sautéed zucchini, carrots and yellow squash in a coriander lobster broth—which bordered more on a subtle bisque.

Sizeable seared quail was stuffed with minced wild forest mushrooms, which helped keep the bird moist, and black truffle sauce served to suit our fancy. Softened, shaved celeriac was a keen and serviceable side. We considered the Dover sole that we saw rolled out in hammered copper chafing dishes to tables nearby, but opted instead for something that went more along the ways of winter: we summoned the hearty, beating breast of the hunter and ordered medium rare, mildly musky venison cloaked in venison jus with a soupçon of black truffles. Melted cranberries in sugar, wilted red cabbage and peppery Brussels sprouts that were just fork-tender were ideal accompaniments.

I doubt anyone loves the idea of a dessert trolley more than I do, and on this mode of transportation we found at least a few treats that we had to try. Armed with wicked, generous pours of Armagnac (which we sipped on, in a slow revel) we picked from said trolley an offering of oeufs à la neige, the meringue confection, with an apparently Pollack-inspired spray of caramel lightly spattered on top of it. More meringue followed with the lemon tart and a fun layer of toasted marshmallows. Pear tart tartine arrived with a vanilla butter crust and an amiable resolution that, after lingering for more than three  hours, we should probably go home.

Short Order: An elegant, classic French restaurant in a secluded spot on the Upper East Side.

Peter’s Pans:
We moved to another table because of the decrepit, shrieking woman with dietary restrictions that was seated at a banquette all too near to us.

Posted by Peter Sherwood at 1:49 PM