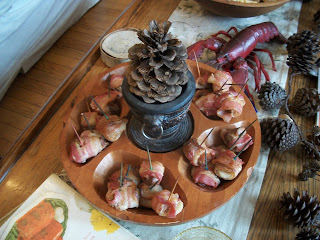 It was that time of the month again--for our play reading.  We skipped December because of all of the holiday bustle and launched once again triumphantly with Auntie Mame. The friend of mine slated to play Mame was unfortunately out of town but as I already had about 10 other takers who could show up, what was a host with the most supposed to do? I leapt into the gargantuan role myself as my other friends assumed their roles, all 40 of them!

The story involving the eccentric aunt in question revolves around a blithe spirit who suddenly finds herself in charge of her young nephew, after the death of her brother--naturally, hilarity ensues in this classic play. The action spans as many locales as it nearly does decades: there's always a party in the certifiably chic apartment at No. 3 Beekman Place in Manhattan; a wild fox hunt races full gallop Down South in Peckerwood; bigotry is confronted in Connecticut and a honeymoon that takes years traipses across the globe. I set the table as such: festive flutes and knocked over martini glasses were filled with pearls as simulated spirits; a riding hat was perched on a bottle of Champagne immersed in ice near a vintage fox hat; a map of Connecticut served as a centerpiece; candles and candlesticks from Marrakesh and Africa took fair care of the international aspect. 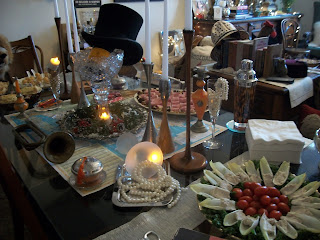 When the Great Depression hit, Mame lost everything in the crash of '29 and decided she needed Christmas a little early (with Thanksgiving not even upon them), so I created a snowy wreath at the bottom of our punch bowl from fir boughs, artificial pine cones with berries and shredded coconut. 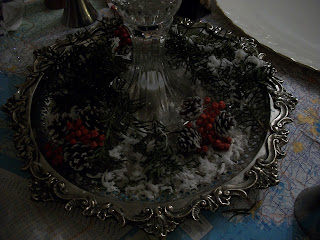 The famous quote from the play is "Life is a banquet!" My menu was based on the idea of a 50's cocktail party, with some help from Saveur magazine's feature "Midnight in the Parlor of Bourbon and Rumaki" in issue #71. Note the rumaki in the top picture, with marinated chicken livers and slivered water chestnuts enraptured by bacon. The recipes may be found here but I definitely dabbled on my own and took liberties with the finely composed party menu that was so elegantly and enticingly written about. To nibble on, Baby also made cheese straws from puff pastry dough, with a little garlic powder and Old Bay seasoning. 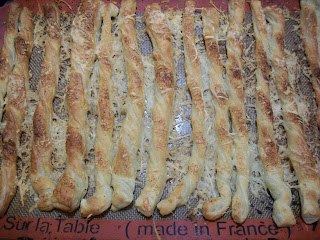 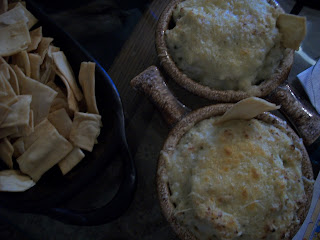 These crab spoons were a delight. I mixed canned lump crab meat with some chopped shallots, mayonnaise and a little Dijon mustard. For a topper, Baby and I cut out little leaves from the remainder of the puff pastry dough and sprinkled them with a blend of shredded Gruyere and Swiss cheeses before tossing them in the oven. Suddenly we found ourselves with instant gougeres! 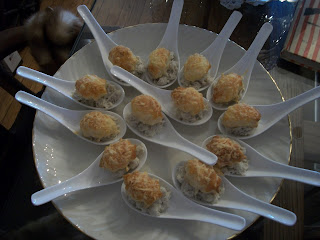 We used black forest ham instead of prosciutto, as the Saveur menu suggests, with cream cheese and olives stuffed in our rolls, presented in a checkerboard fashion with dried cranberries and mixed nuts filling out the periphery of the platter. 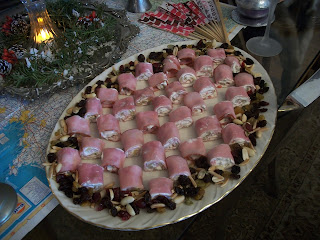 Delicious prepared whitefish courtesy of Blue Hill Bay was spread into leaves of Belgian Endive, anchored by a host of grape tomatoes and outfitted with parsley. Sort of like another wreath, don't you think? 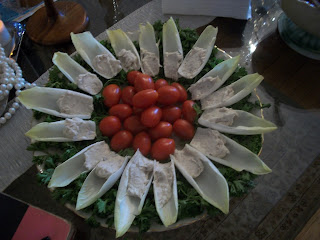 And of course, my version of the Flaming Mame with tequila, grapefruit syrup and bitters and a touch of incendiary absinthe made sure we were all lit, even before the Champagne toast at intermission. 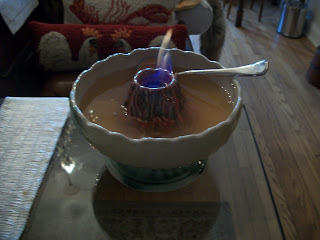 My only regret is that I neglected to take any pictures of the Chex mix. Well, one must live, anyway!