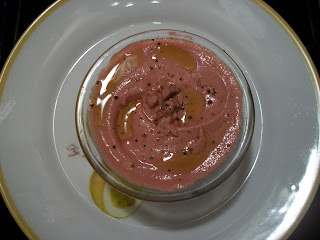 I found this recipe in the pages of the Aug./Sept. 2015 issue of Saveur--however, truth be told, I've found little else in the publication over the recent year. Pity. But anyway, surely, somewhere on this blog I've compared beets to Steinbeck's rich red earth, and here, this quick, ridiculously simple mixture makes the most of summer's bounty. I cut the recipe in half for just me, but below is the whole deal with my thoughts in italics. Makes 2 1/2 cups.

Beet Dip
Bring a medium saucepan of water to a boil. Add 1 lb. beets, trimmed, and cook until tender, about 1 hour. I used a package of beets already peeled and cooked, as that's what I had on hand, sparing a hot stove top! And as I only had a 1/4 lb. at that, I added slivers of a crisp green apple to add body. Drain and peel the beets, then transfer to a blender along with 1/2 cup tahini, 3 Tbsp. fresh lemon juice, 2 garlic cloves, and 3 ice cubes. Season with salt and pepper and puree until smooth. Spoon into a bowl and garnish with a drizzle of olive oil and 1 Tbsp. toasted pine nuts. I didn't use those as I don't much care for them.  Chill at least 20 minutes and serve with pita bread as suggested or snack crackers, such as Tam Tams. Do drizzle with a good olive oil, garnish with some chopped beets (try chopped walnuts too!) and a few stiff grinds of black pepper or a sprinkling perhaps of cumin. Thanks to Saveur for the inspiration, despite its apparent, largely unsatisfying period of transition.