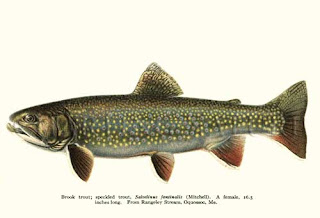 Having weathered the last two days of monsoon-like conditions while firmly ensconced downtown in jury duty waiting for a case to present itself, before we were finally sprung free I put down my book and crossword puzzles and began to imagine myself elsewhere, outside, where the rain had hopefully stopped, doing other patient, more pleasant things: I pictured myself shopping for groceries to make a dinner of brook trout, Lentilles du Puy and a simple but suitable salad, for Baby and me.

Charting the course of the commute in my mind, I knew I would take the train from the civic center of town to the 14th street stop and make my way a block over to Chelsea Market, where, strolling down its concourse, I'd stop into Fat Witch and nibble on a brownie sample they usually always have on their counter. Then, just past the gushing waterfall and whoever else may be around at that time of day, I'd embrace the salty, clean smell of fresh fish and enter the refrigerated air of The Lobster Place. "Do you have brook trout?" I'd inquire of the friendly counterman. "Why, yes we do sir," he'd answer, "right this way!" I'd pick two of the fattest fillets, pay the kindly cashier and walk further uptown to the market around the corner from my apartment and finish the job with a basket full of beets and carrots for the lentil dish, and Boston lettuce perhaps for the salad. Thyme for the dressing maybe with lemon and Dijon mustard...

Raised from my reverie, we were released early, around 230pm (as opposed to 5pm) and off I went, doing exactly as I had planned. Well, almost exactly. Although there was no longer a downpour outside, there was still a persistent mist. But it didn't warrant an umbrella. I caught an express train right away and was eating my brownie sample before I even realized I had done my service and was free of my jury duties. Although the counterman at The Lobster Place was indeed friendly, I was instantly thwarted. There was only one brook trout, he showed me, weighing less than a pound! Why the heck was there such a run of brook trout today of all days? Still it was long-ish and could be shared decently enough, I guessed; I would shroud it in my hearty dish of Lentilles du Puy, making a wreath around the fish and dressing it up with some chopped beets for color. The dressing was a go (see below) for a loosely shredded head of Boston lettuce and if that still wasn't enough to eat for us, I remembered we had an unopened container of raspberry sorbet, recently purchased.

While the lentils simmered in the oven, I made the salad dressing. Afterward, the trout cooked quickly on a grill pan with olive oil, a few sprays of lemon, and dashes of salt and pepper. For a twist on tradition, make a court bouillon ahead of time and instead of poaching the fillets with this broth in the classic manner, whisk a few tablespoons of butter (one tablespoon at a time) into about a cup of the concentrated broth over low heat until thickened for a wonderful sauce to pour over the grilled fish.

I hadn't worked from a grocery list, only well-intentioned memory, so I forgot that parsley goes in with the lentils too, along with more shallots than I had bought. It was of little matter though, because by the time Baby got home, it was nice just to have a homemade, comforting dinner on the table, one certainly that I'd had alot of time to think about!

Method
Mix lemon juice, mustard, sugar and shallot in a small container, preferably with a lid. Slowly whisk in oil to create and emulsion and add thyme. Flavor to taste with salt and pepper. Set aside for a bit until ready to use. When the salad is about to be served, put the lid on the container and really give it a good couple of shakes to revive the dressing and then drizzle judiciously over the salad, just coating the lettuce and mix together.
Posted by Peter Sherwood at 7:38 PM