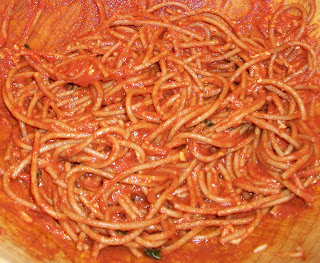 As far as I’m concerned, over that last decade at least, chef Scott Conant has continually sent gastronomic love letters to New York. His supple pockets of duck and foie gras ravioli and perfect coils of spaghetti and sauce at Scarpetta have sent me howling! I’ve yet to visit and surely be enchanted by his alchemic ventures in the Faustina kitchen at the Cooper Square Hotel but at a recent bazaar in its courtyard, Mr. Conant’s sauce was up for sale, 10 bucks for a small jar, made fresh that morning, and we were more than eager to try it at home. It wasn’t nearly enough to coat our glut of pasta but thankfully the recipe came with as well so we could make more. Although it calls for blanching 20 plum tomatoes and peeling off their skins and mashing them up later, I just went with what we already had in our cupboards, namely two 28 oz. cans of Redpack tomato puree although crushed tomatoes would work as well.

Here’s how it went for us: the olive oil we had went in first, brought to a very hot temperature and the puree followed. A few dashes of cayenne pepper were added, with some kosher salt and freshly ground pepper to taste. After simmering down about 20-25 minutes, we let it cool and sit overnight in the refrigerator. The next day, we boiled a pound of pasta in salted water according to the directions on the box until just al dente, added the drained pasta (reserving about 1/2 cup or so of the pasta water) to the re-heated sauce, tossed around and finished off with a tablespoon of the best butter we had (Vermont Cheese Company), 6-8 basil leaves rolled up and cut on the bias for a festive chiffonade, and added in about ½ cup of parmesan-reggiano.

Buon appetito!
Posted by Peter Sherwood at 9:20 AM