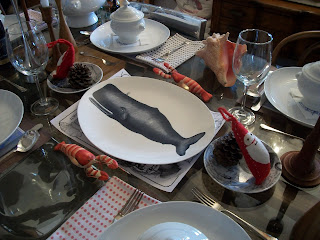 When Baby and I last visited friends in Ocean City, NJ, we went to one of our favorite new found places, The Crab Trap, which is a sort of maritime shanty that has been around for years. It's a sprawling, bustling place with lots of great seafood (love the lobster!) and good martinis. We even bought a bunch of paper place mats and appropriated a few bar napkins as well, all emblazoned with the logo. We happened to mention this dining adventure to other friends and so surprisingly, they too know about and love The Crab Trap and have family dinners there, steeped in tradition. So, a dinner menu of fish was set, as was the table, with our somewhat ill-gotten booty: the place mats and napkins.

Our British neighbor had been talking about an old classic lot of steamed prawns, served in beer mugs, so as he and his wife were also our guests, I suggested he bring a bunch over! The sauce is a secret but I do believe Thousand Island dressing is involved. 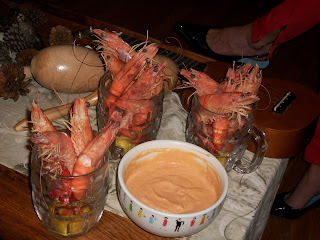 I'd wanted to make my Wicked Good Clam Chowdah again, so that was a perfect starter, with my father's clams, pulled from the shores of Maine's Muscongus Bay. Crab cakes carried on and then we dove into a heap of Lemon Sole Meuniere. Paula Deen's most delicious Chocolate Bread Pudding was made the day before and acclimated in the refrigerator before being reheated and served to make a very satisfying conclusion to our dinner. My comments about that are in italics.

Per usual, I got busy with all the cooking and didn't have time to take more photos!