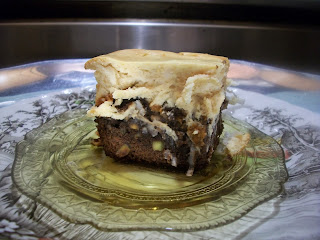 Baby was as busy as a holiday elf this weekend, but instead of a workshop, he went to work in the kitchen to create these special bars. I suggest you do too. How the aromas of vanilla, sugar, spice--you know, everything nice--filled the entire apartment and wafted down the hall as our neighbors with wondering eyes asked just what should appear! Any remaining fillings may be put into a graham cracker crust pie shell and baked until firm, about 30 minutes--or put into individual ramekins as shown below. Do enjoy! 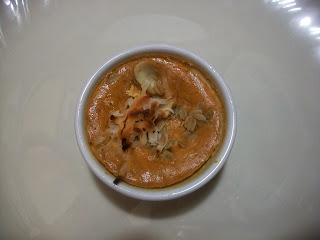 Method
Prepared brownie mix as directed on box, add pistachios but only put in a preheated 350 degree oven for 15 minutes in a 9"x 9" pan with bottom only greased. While that is cooking, mix in eggs, evaporated milk and maple syrup to the pumpkin pie filling. When the brownies have finished baking after 15 minutes, remove from oven. Turn oven up to 425 degrees. Gently pour 2/3 of pumpkin mixture over the brownies and spread evenly with a rubber spatula. Return to oven for 15 minutes. While that is baking, prepare cheesecake batter. In the bowl of an electric mixer, combine cream cheese, sugar and vanilla extract. Beat until smooth. Beat in eggs one at a time until each one is fully incorporated. Take out brownie and pumpkin mixture and turn oven back down to 350 degrees. Using 2/3 of cheesecake mixture, spread evenly over the brownie and pumpkin mixture. Put all back into oven, top with shredded coconut and bake 30-40 minutes. Let cool and refrigerate for two hours. Cut however you like but should serve about 12 or less depending on your eager guests.