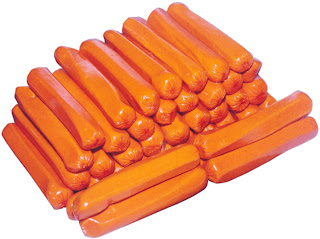 Although my childhood is long over, the horror of my family’s Saturday night dinners lingers on. I grew up in New England, where we ate what we were told, thank you very much, and many of the meals my mother made during the week were certainly good, such as the CorningWare crock of mac n’ cheese (that I still request when home), spaghetti, hamburgers, creamed ham on toast (much better than it sounds) or La Choy Chop Suey—and yes, the occasional Maine lobster with a bunch of steamed clams, dripping with butter.

Saturday nights, however, were an entirely different matter. It began around 5 p.m. with my brothers hogging the TV, watching the Wide World of Sports until our parents called us to dinner. The slow, careful walk to the table filled me with dread. Unforgivable carrot and raisin salad in a river of vinegar led the nauseating parade, with bubbly, gloppy baked beans and sour sauerkraut in tow. Damp B&M Brown Bread actually came in a can, filled with more shriveled raisins. To me, it tasted like dirt and molasses, dank as a cellar. After the lid was opened, the spongy bread product was expelled from the can, heated up and served with the lovely ringed can indentations still intact. The only thing I could stomach was the hot dogs. The rest went into my napkin. My brothers didn’t seem to mind and wolfed everything down so they could get back to the TV.

Frankly, before I was born, my brothers had it worse. They still vividly recount the eels my father had fished from the river and how the black shiny creatures writhed around in the cast iron skillet (which, by the way, he still faithfully uses). The stench that filled the house was apparently unbearable.

A few years ago, I summoned the nerve to try Brown Bread again. Curiously enough, I loved its warm, molasses flavor. And I actually make baked beans nowadays myself and always put sauerkraut on my hot dogs. My brothers will never go near eels again though, but gratefully we’re all adult enough now that if we don’t care for something, we can just say “no, thank you.”
cookingvillage.com
Posted by Peter Sherwood at 3:44 PM