Just For The Halibut 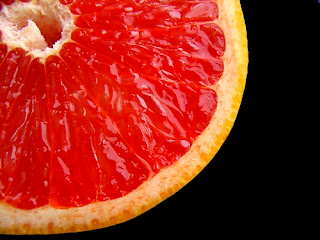 This was totally off the cuff: I just happened upon a Martha Stewart recipe I had printed out in 2007 for Halibut with Grapefruit and Rosemary. I had planned to make dinner for Baby and me and since we already had halibut in the refrigerator courtesy of a fisherman friend, I went out and bought some Del Monte SunFresh red grapefruit segments, Florida's Natural Ruby Red Grapefruit juice and fresh rosemary. Seemed to me to be a pretty good way to welcome in the summer. Ms. Stewart's recipe naturally calls for exacting work, such as trimming the pith from two ruby red grapefruits, etc. but my trimmed down version of the recipe is easier and simply fantastic for a simple evening at home, served with a side of Corn and Shrimp Salsa, which is my own recipe.

Halibut for Two (adapted from marthastewart.com)
2 cups Ruby Red Grapefruit juice
8 segments from a jar of red grapefruit segments
1 sprig plus 1 tsp chopped rosemary
1 Tb sugar
Salt and black pepper
Olive oil
2 pieces of skinless halibut, sized to your appetite
-Preheat broiler
-Pour juice, rosemary, sugar, 1/4 cup water, 1/4 tsp salt into a small saucepan over medium heat and let boil until reduced to a syrup, about 15 minutes or so. If sauce becomes too thick, simply add a little more juice to thin out
-Brush fish with olive oil, salt and pepper and place on a baking sheet in the oven for about 10 minutes
-When juice mixture has been reduced to a fragrant syrup, toss out the rosemary sprig, and add the grapefruit segments to warm up
-Drizzle over your fabulous fish, each dish topped with the segments, divided between the plates
Corn and Shrimp Salsa
I thought a nice side would be a corn and shrimp salsa as we also had some deveined Black Tiger shrimp in our freezer, which was easily thawed by spraying cold water over them in a colander for two or three minutes. I roasted three ears of corn in a 450 degree oven, coating them with lemon olive oil, extra virgin oil, lime juice and salt and black pepper. Grilled shrimp (about two minutes each side in a Calphalon grill pan) was also done so in both oils and more pepper. I chopped the whites and some of the green ends of two scallions and put them in an accomodating bowl, and covered with the still steaming shrimp, some salt, and lime juice. The roasted corn was easily shaved off the cob once cooled, the kernels falling into the other ingredients of the salsa mixture. Spoon a heaping portion on a plate alongside the halibut.
Halibut and salsa...just for the hell of it! 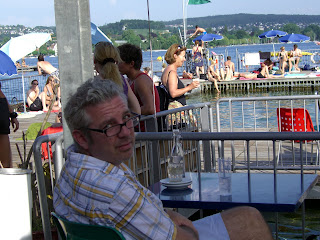 Posted by Peter Sherwood at 7:55 PM