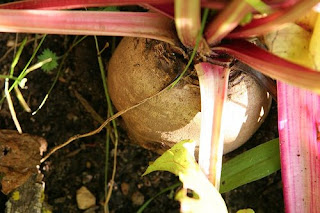 In preparation for our Eastern European Dinner, Baby and I hauled ourselves to Greenpoint, Brooklyn to fetch a few of the ingredients that were required. We planned the meal around the Polish dish Bigos, which translates to "Hunter's Stew" and I thought a good way to start the meal would be with a cool, savory beet borscht and to finish with meggyleves, a chilled Hungarian sweetly sour cherry concoction--two greatly varying kinds of pink soup!

Two pounds of Vavel sauerkraut was first on our list, from West Nassau Meat on Manhattan Avenue, just north of Greenpoint Avenue. What an incredible scene that was! The line twisted around the little shop and out the door as everyone waited to order their cured and smoked Polish meats. We switched a vowel around or something at the counter and almost ordered blood sausage for our Bigos which would have been disastrous, as we were told from several of the thickly-accented customers in line with us. It was krajana sausage that we wanted, not what we had mistakenly pronounced to the meat man, but it was also a must to include podwawelska sausage as well to make a true Bigos. Thank goodness our sudden friends alerted us. Krajana is absolutely delicious, and can be eaten just as it is, cold, right out of the paper wrapping! Although it is tempting to eat it right away, boczek (much like a raw slab bacon) does need to be cooked first. We also picked up a pack of dried Polish mushrooms for our Bigos, and a few jars of morello cherries for our sweetly sour soup.

Monday: purchased and browned the veal and beef stew meats, and pork shoulder (leaving the sausage and boczek alone for the moment). The meats came out of the pan, onions and sauerkraut went in, reconsituted mushrooms followed with their liquid and two vegetable bullion cubes. All of the meat was then put in and simmered for about two hours. After adding a cup of red wine (I chose a soft Beaulieu Vineyard merlot--you want more of a gentle excitement here, nothing too headstrong), and a heavy tablespoon of tomato paste, on a low heat, it sat for another three hours. The apartment was filled with an incredible fragrance redolent of the smoked meats, tangy sauerkraut, pungent mushrooms, and divinity. We had to try some. Loved! Our Bigos cooled and was put in the fridge overnight. 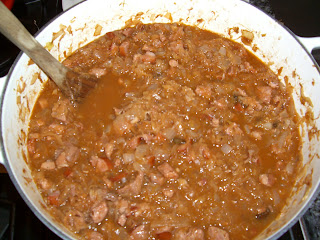 Tuesday: heated the Bigos for another two hours or so, adding water to keep it ensconced in a nice liquid. It took on a darker quality, and yes you bet, it was still really good.

Wednesday: got the ingredients for an unusual, simpler borscht (beets, both light and full fat sour cream, Maille Dijon mustard, bread crumbs, red wine vinegar and cucumbers) and marinated the combination in the fridge overnight. Also got what we needed for Baby's potato pancakes and the stuffed cabbage. The Bigos chilled out in the fridge, to be heated up for two hours before being served on Thursday.

Thursday: the day of the dinner party! In the morning, I pureed the borscht in a blender and was nervous about it, at first: it tasted like mustard soup but was duly remedied by some more heavy cream, sour cream, red wine vinegar and beet juice. I also made the sour cherry soup, which couldn't have been easier and provided more obvious, satisfying results. In the afternoon, I mixed my ground turkey and chicken with peppers and sauteed onions, garlic, for the galumpkies, our stuffed cabbage.

Everyone arrived right on time, even though we had barely set the dining table but it didn't matter though, we situated ourselves around it to chat just the same. The Sisters M brought an incredibly gorgeous towering bouquet of puffy chrysanthemums whose fragrance filled the room. They also brought oceans of wine, as did Slushy, Bink and Chloe Rossa, which was a fine starting point. Baby and I made a toast to our guests with shots of a freezing Debowa Polska vodka enriched by oak and followed with the best potato pancakes that Baby made, and some applesauce. We had the borscht appetizer in little cups, which was (thankfully) a success. My tinkering worked out. And before we even brought out the proper napkins to sit around the table a little more formerly for the main courses, we just used a roll of paper towels with our appetizers.

Although proud is not a word I would generally use to describe a dinner made from the heart, I am proud of all of it, such an excursion into unfamiliar terrain. The Bigos was extraordinary and worth all the invested time as we watched the dish evolve. Bigos utterly hinges on the dried Polish mushrooms that deliver such an elusive flavor--and just as important, find the best authentic sausages available.

What a group effort it was: our friends from the Polish deli in Greenpoint who helped us select the right meat; the friend whose family galumpkie recipe I used and altered with crisp green apples and a few slivers of orange rind, as insisted on by yet another friend; our guests who really rallied round to bring wines perfect for every course; and of course everything from Baby, his unerring taste, his riveting potato pancakes, and cheese blintzes to finish with the cherry soup.

I think it's fair to say we were all tickled a perfect shade of pink! 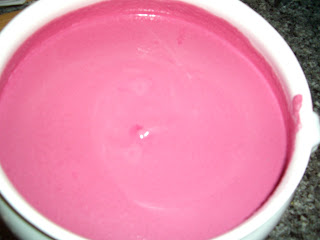