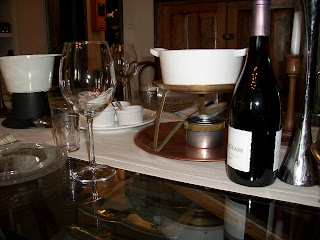 We felt it was time to haul out our Le Creuset fondue pot and Revere ware in order to snuggle down with a few friends on a blustery evening and pretend we just got off the slopes! Fondue is such a fun throwback, all the rage when so many of our parents made it as we were growing up. As hosts, we proposed to make a night of it, with three fondue courses--and of course wine. Baby and I greeted our guests by sporting black lounging pajamas, turtlenecks, slim-fit pants and cozy slippers. Because of the 60's score, as much as our dress I suppose too, our friend commented that she felt like she had just walked onto the set of Bewitched. If I could only just do that twitching thing with my nose...now fire up your cans of sterno and get started!

So, off we go, apres the snow--with some wine pairing suggestions. 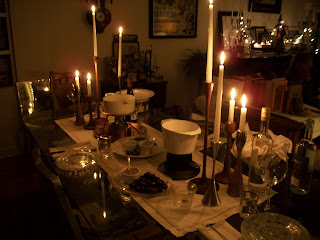 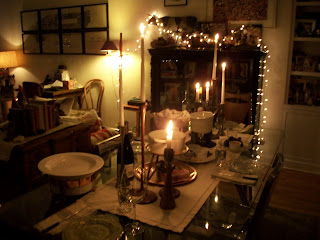 Our fondue made in Switzerland a few years back is here. What I remember learning the most is to not only put kirsch (cherry brandy) in the cheese fondue mixture, but to also have little glasses of it at the ready for dipping the bread chunks with skewers before plunging into the bubbly cheese. Not only is kirsch very good (and very strong, mind you), it more importantly assists in the digestion.

The four basic components of fondue involve the cheeses; liquid (wine or kirsch) to avoid burning; a balancing acid (such as lemon) to avoid curdling; and starch (cornstarch) to bring it all together in silken unity. Cutting to the chase, we tried something less involved this time--a bag of Emmi fondue with gruyere and Swiss already shredded together and cornstarch added in. Easy instructions are on the back ("just add wine!"). Most likely any prepackaged variety will suggest adding just white wine, but if you can find kirsch, add both. Rub your pot with half a clove of garlic first to impart further insidiousness. 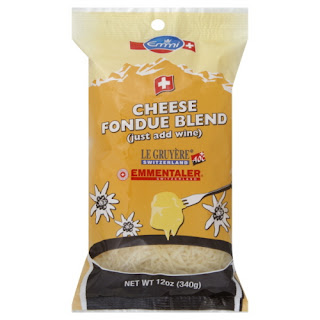 Beef Bourguignonne
Wine: Pinot Noir with cherry notes, perfect to ride off of the kirsch
Serve with: the meat acts as the dipping component

Use grapeseed or peanut oil as it has a high smoking point, more tolerant to heat than olive oil for your meat fondue--and you'll want sirloin or tenderloin for this. Do not crowd your simmering pot with a lot of skewered meat at the same time--the oil gets angry and lets you know it! Sauces on the side such as blue cheese, steak or mustard are requisite. These are found on the link here as well as the recipe itself.

This we did on our own. A bag of Nestle's milk chocolate morsels will melt nicely over medium low heat, before being thinned out with milk, or heavy cream, if you're feeling outrageous. Throw some Godiva chocolate liqueur in there as well and stir before introducing all to the pot on the table suspended over the can of sterno.

Stay warm and do enjoy!