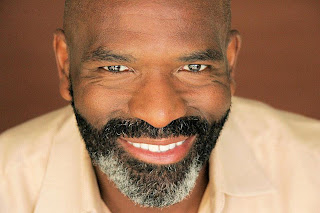 Back in the days when I was a theatrical agent, I was fortunate to represent the wonderful actor Bernard K. Addison. I recently discovered he's as equally at home in the kitchen as he is on stage. Heeeere's, Mr. Addison!

"It was a pretty long day in the kitchen. I made turkey/chicken stock with leftover turkey carcass bones and chicken necks so I could make the wild rice in the broth. For the duck, it's a Twice Cooked Duck with Asian spices. Make sure that the equipment must be large enough to steam the duck, otherwise not enough fat will be rendered."

Twice Cooked Duck
Adapted from The Cook's Illustrated Complete Book of Poultry
Ingredients
1 duck
4 whole star anise
1 cinnamon stick
8 Schezwan peppercorns (I didn't do that, just peppercorns) 2 T kosher salt
1 cup cilantro
4 pieces unpeeled ginger root
Black soy sauceMethod
Puncture the duck in the breast in all the fatty places, making sure that you don't puncture the flesh, so the fat can be sweated/rendered out during the first cooking. Heat the spices (not the salt) in a dry skillet until it smokes; then grind it to a powder. Add salt and rub half the mixture in the cavity and on the outside of the duck. Fill the cavity with the cilantro and ginger, and place on a rack in a cool, dry place for four hours.

Using a large wok, bring water to a boil. Place duck on a rack one inch above the water, cover, and steam for 50-60 minutes, adding boiling water as needed. Skin should pull away from the legs by this point. Remove from oven and cool to room temperature. Preheat oven to 400 degrees. Place duck on rack in roaster, brush with the soy sauce, and cook until brown and skin is crispy, around 40 minutes.

Make the wild rice in 2-1/4 cups broth, 1 cup rice, bring to a boil and then cover and simmer for 50 minutes. For the asparagus, use 1/3 c broth, 1 T butter, and enough asparagus to cover the bottom of a pan, with pressed garlic added, and boil down the broth and brown in the remaining butter/garlic.

Posted by Peter Sherwood at 9:48 AM