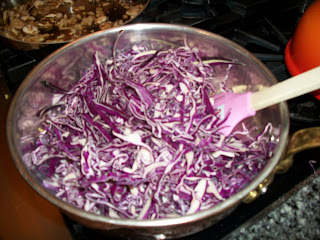 A dish of scallops and red cabbage wasn't intentional at all. I was just messing about with haphazard ingredients in the house--but when such happenstance intervenes, mere coincidence and alchemy do find themselves to be quite amiable companions in the kitchen.

Toasting the fennel seeds is the first part, a dry tablespoon for 10 seconds in a heated skillet; when you can smell their fragrance, they are done. Add in a thinly sliced half head of red cabbage and toss now and then with two tablespoons of olive oil while cooking down on a lesser flame. Add in about 1/4 cup maple syrup and when your cabbage has wilted further, add more syrup. Although the procedure is simple, it is patient work, not to be hurried.

Meanwhile, get your scallops going--just around half an eager pound will satisfy four people when accompanied by other dishes featured in a light buffet. Start by simmering a cup of white wine with 2 tablespoons white wine vinegar and a tablespoon of Penzy's Shallot Pepper until reduced down to about 3 tablespoons. Take off heat and whisk in a few tablespoons of European butter such as Lurpak to your liking and whisk in 1 tablespoon dried chives, a little salt and pepper as well. Heat up two tablespoons of olive oil in a separate skillet, add salt and pepper to your scallops and quickly sear them on both sides. Douse with juice from half of a fresh lime, and then in certain vessels, top the wilted red cabbage with our little scallop friends.

Thanks for the scallop inspiration from David Bazirgan, from The Fifth Floor restaurant in San Francisco.
Posted by Peter Sherwood at 9:35 AM