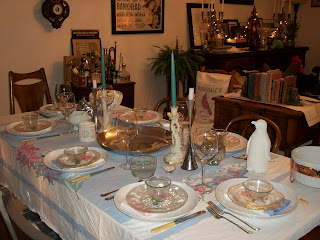 My brilliant cousin gave me a beautiful vintage table cloth with bouquets of muted pink and teal flowers against a bordered pale blue and white background. When she saw it at a flea market it struck her because she remembered from a recent visit that we had set of hand-embroidered floral napkins that would match perfectly. She also paired this with a set of blue candlesticks to wrap up the whole thing, suggesting it would be an idyllic spring table setting. But who can wait? I hastened to set up a somewhat wintry table with the promise of spring just bursting through and launched my Spring Fling!

Behold this woodland creature who stopped by! 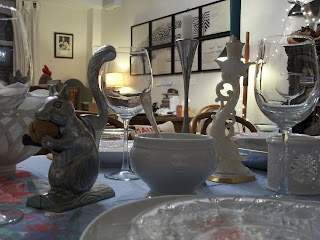 An issue of Gourmet magazine set the stage for this one, from January of 2008. The fabulous menu for eight is quite extensive and looked absolutely exhausting and impossible to execute without staff! I just cut down on the outrageously overwrought menu and corners as well to make it as simple as I could. I prepped the sugared blackberries days before, planned my table, braised the pork in advance and had the pots and pans I would need at the ready the day of the party. Don't forget to chill lots of white wine! Biscuits were courtesy of Pillsbury.

Champagne punch was served first before we moved to the dining table for my Night and Day Souffle and hot biscuits with butter and honey. Pork hash accompanied sumptuous shrimp and grits, followed by a respite of winter lettuces with warm bacon dressing. Ambrosia, sugared blackberries and biscuits ensued with a bread pudding of sorts until we were all appropriately flung!

THURSDAY:
Sugared Blackberries
This was so nice--do take the three days to macerate your berries though, and take them out of the refrigerator to tend to them once a day by briefly stirring.

FRIDAY:
Made Braised-Pork Hash
Adding homemade vanilla extract at the end was my own invention, otherwise I would have tossed in a split vanilla bean at the start, had I not thought to do so too late. It was a great idea--and if only fortitude had won over timidity, I would have added more.

SATURDAY:
Double-checked my lists and chopped/sliced/diced whatever I could.
Made "Bread Pudding" with cubes of a Betty Crocker orange cake, added in Jell-o banana pudding, later to be drizzled with chocolate sauce and topped with fresh strawberries.

SUNDAY: Spring Fling!
Champagne Punch
This was so good. Can be chilled up to 3 hours before serving; Champagne bubbles in at the end.

Night and Day Souffle
I couldn't be bothered with the timing of the creamed eggs with spinach and country ham found here. It looks really wonderful, just too much. My Night and Day Souffle is much easier. For this version, I just beat 8 eggs together with heavy cream, chopped bacon and chives, salt and pepper and a little grated Parmesan on top. It goes into a 350-degree oven for 40 minutes or so and DONE. Serve it quickly though while it is puffed up and strutting; soon it naturally does collapse. Put up a side of Pillsbury biscuits with honey and butter.

Lowcountry Breakfast Shrimp
Prep your onions (just slice them and ignore the worry-work of a fine dice), garlic and scallions the night before. Cook them in butter ahead of time and add in the shrimp later, just before serving. Dredge half of the shrimp in flour and work in to create a nice creaminess that won't overcook the shrimp. Threads of thyme are a recommended (by me) addition.

Creamy Stone-Ground Grits
Use instant grits instead of all the folderol and add heavy cream, milk and butter to your liking. Enough already.

This is not difficult at all. The braising just takes a lot of time so just move on to other things like laundry while the meat simmers down and falls off the bone.

Winter Lettuces with Warm Sweet-and-Sharp Dressing
Again, couldn't deal with all of this--oy, boiling vinegar, reducing? Ugh. I adapted my go-to Shallot and Champagne Vinaigrette courtesy of Michael Lomonaco, found here. And I made it the day before in the food processor and kept it in the refrigerator instead of huffing and puffing over an oven. I subbed cider vinegar for Champagne vinegar; brown sugar for regular sugar; 1/4 cup melted bacon grease with 1/2 cup olive oil instead of just 3/4 cup olive oil to create an entirely new, hassle-free dressing. Crumbled bacon was thrown in over the salad and a little extra bacon grease (warmed from the microwave) too. Jaws dropped.

Ambrosia
So easy and delicious--from jars of Del Monte supremed white and pink grapefruit and oranges, no apologies! I wasn't about to supreme 8 navel oranges. The only thing that takes any time is the chilling of this dessert in the fridge. And no, I did not roast a whole coconut in the oven and hack it apart. A bag of shredded coconut is quite serviceable. Please.

Sugared Blackberries
Served with a pillar of more biscuits, cold this round.

Our Orange Cake and Banana "Bread Pudding" is seen below. 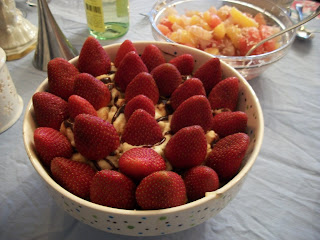 Do you know how to spring fling?