Stick A Fork In It - Stromboli (of sorts) 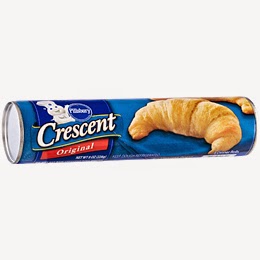 This was so easy and somewhat unexpected!

My friend came over for dinner at the last moment--we had plans to meet elsewhere but the weather was decidedly inclement and I did not want to venture outside. But what to serve? A tube of Pillsbury crescent rolls coiled inside the refrigerator beckoned; I had some sliced pepperoni and fresh mushrooms in there too. I whipped up an easy Alfredo sauce as I already had butter, heavy cream (sometimes for coffee, eeek), garlic and Parmesan cheese on hand.

After concocting the sauce, I let it simmer on low heat. Meanwhile, I sauteed the mushrooms in butter and put the crescent dough in the oven flat-out on a baking sheet for half the suggested cooking time (a mere five minutes) before taking it out, slathering the sauce evenly upon it and topping the whole thing with the mushrooms and pepperoni. It went back into the oven for another five minutes or so until nicely golden brown. When cool enough to handle, I rolled everything into a log, like an ersatz Stromboli and finished it with steamed spinach.

Et voila! Dinner! A stiff red wine is good for this, and perhaps some green beans almondine. A simple salad lightly dressed with balsamic vinegar and a little olive oil is also a nice accompaniment. Why not serve a gelato of some kind such as pistachio or stracciatella for dessert? Do enjoy!