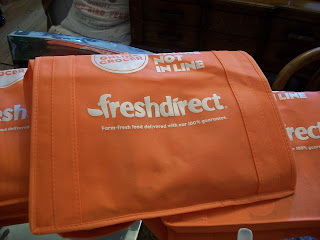 Alright, I'll admit it. I'm fairly obsessed with FreshDirect. I've spoken of my love previously here on Evenings With Peter so I won't belabor the point. Suffice to say, I won a House Party promotion from them and threw the event. Besides a $100 e-gift certificate to use for the food I ordered, I received a Party Pack that included reusable shopping bags, special offer brochures, notepads, aprons and a host of recipes that all our guests took home. We also giddily raffled off a FreshDirect oven mitt!

FreshDirect asked us to choose a theme, so Baby and I went retro with Pot Luck and things that people used to bring to actual house parties ever so long ago. 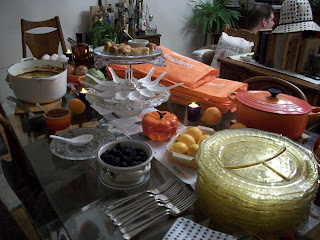 Although the basic set up for our menu was simple enough, everything we made was slightly different and there were no chafing dishes involved.

Produce played its part on the table and I put herbs such as rosemary, dill, and parsley in a pitcher instead of flowers. 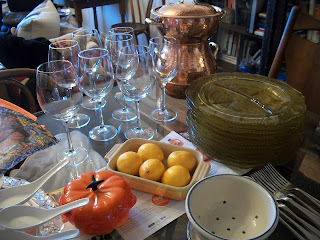 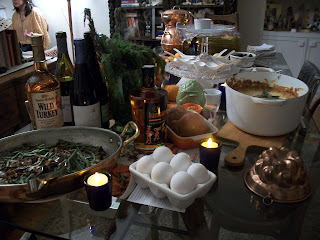 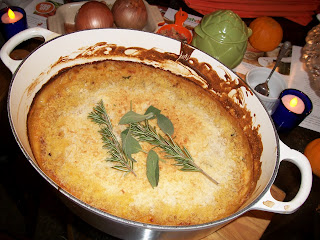 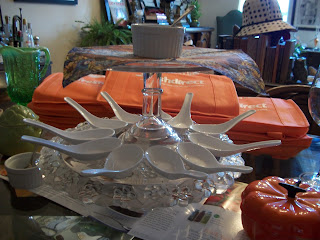 The green bean casserole however did not involve Campbell's mushroom soup; it was a riff, made instead with creamy bechamel sauce and we sauteed our own wild bunch of mushrooms in butter and olive oil. Refined haricot verts subbed for everyday green beans and I frizzled fresh shallots instead of using Durkee's onions from the can. The bechamel in preparation... 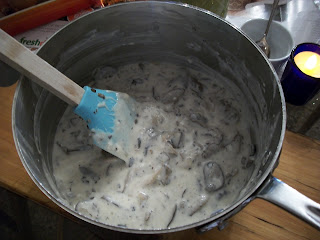 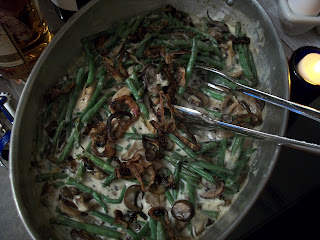 The meatloaf was pulled from an old Martha Stewart recipe that I love, with homemade tomato jam for slathering. Cut to the chase and use a judicious amount (a scant tablespoon) of Chinese Five-Spice Powder instead of dealing with the cinnamon sticks, ginger, cloves and star anise. I used homemade bread crumbs I already had on hand, mixed with panko breadcrumbs as well. Also, I subbed celery salt for celery and didn't use additional salt at all, as the recipe suggests. Here's the meatloaf, about to go in the oven. 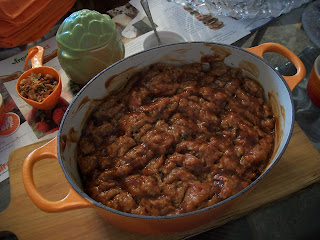 Of course, I had to light something on fire. Ben & Jerry's gorgeous vanilla ice cream came out with ripe blackberries and burnt walnuts in a flaming buerre noisette sauce with brandy. It was so much fun. 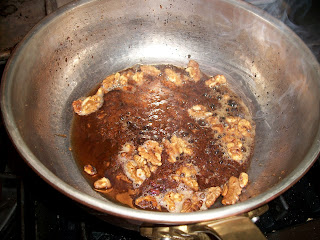 Baby looked rather sporting in his apron. 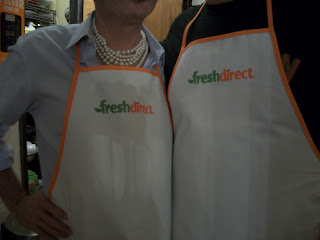 A hundred dollars fed ten people (actually it was $99.66, like on The Price Is Right--the items I ordered didn't go over). And it was fabulous. Fresh Direct. Get to it. 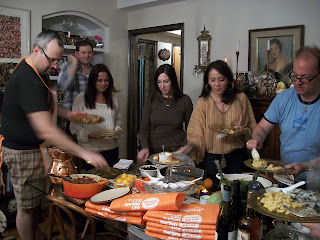 Posted by Peter Sherwood at 9:32 AM