My First Taste of Mushrooms 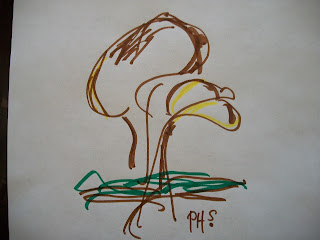 My father's friend and I were tossing a football back and forth together in the backyard when I was eight years old one afternoon. He threw one pass way too far over my head and it soared well past me, shattering the kitchen window that belonged to my difficult, frequently devastating, confusingly inspiring and considerably older relative, cousin Annie, who once lived on the other side of our house. "Oops...looks like you broke a window," he said carelessly, drowsily. I broke a window? No! There was no witness but the obvious cause of that window breaking was because he threw a football in it and he broke it. I seem to remember but at least always felt that perhaps he was a little slow: a dopey grownup in a clown suit. I was just devastated nonetheless, and in apology and tears for some reason I gave Annie a paint-by-numbers of a few simple, flowering amber, yellow, and brown mushrooms that I had reasonably created. It was all I had to give. I was eight. And none of it was my fault. That was my first taste of mushrooms.
Posted by Peter Sherwood at 9:28 AM