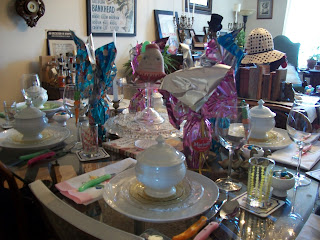 While I was looking up something or other in a copy of Saveur magazine, I encountered an Roman Easter feast within the pages. Baby and I had planned to have a few friends over for the upcoming holiday and it seemed like these recipes would make an extraordinary meal indeed.

We had a lot of fun decorating the table with grandly colorful foil-wrapped chocolate eggs (we removed them before sitting down so we could see one another), pastel napkins, and chocolate Lindt carrots dangling off of the glasses. 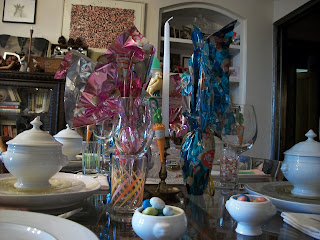 This little fellow doesn't seem like he's headed for a great fall, perched on tiered cake stands; rather it appears he's in for a great Spring! 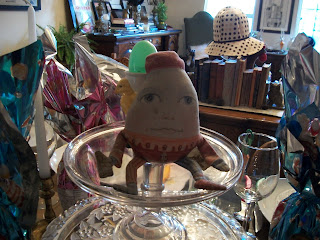 Stracciatella, a Roman egg drop soup, came out first, with the prosciutto and olive bread for dipping, seen below. 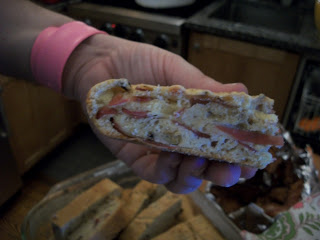 We ventured on to our first pasta course: Fettuccine alla Romana, with beef, pork, chicken livers, and a sumptuous short rib in red wine sauce. 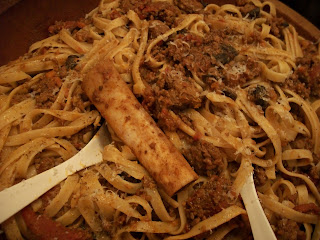 Artichoke hearts marinated with wine, lemon, olive oil and topped with fresh chopped mint and crispy bacon served as the pause. I riffed on this recipe, using canned artichokes and not cooking the artichokes as that would make them mushy. I simply poured the hot sauce over them, tossed with mint and lemon (to prevent them discoloring) and let cool before putting in the refrigerator to marinate for a few hours. The bacon was my idea. 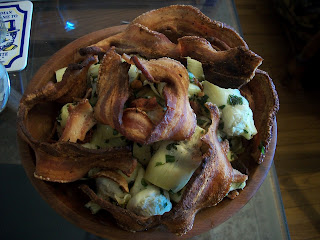 The collective plunge continued with a second, simpler fettuccine with fava beans, that featured onions, pancetta and escarole tossed about in olive oil. As that was made on the spot, I didn't have the time to take a picture of it!

Handsome lamb served as the centerpiece of the meal, coated in olive oil, and stuffed with garlic and rosemary, shown here, about to go in the oven. I followed the basic recipe but used a leg of lamb instead of the whole thing, as the recipe suggests. 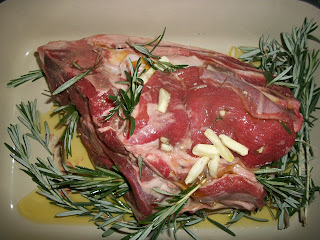 This pyramid-shaped, tiramisu flavored with orange was unlike anything I had ever seen or made. It wasn't that hard in execution--it just needs several hours to chill ahead of time--but boy, was it good! Savaoiardi ladyfingers are soaked in cream and Cointreau and spread out like spokes of a wheel, followed by a layer of mascarpone cheese, heavy cream and orange zest. This is repeated in smaller layers to form the pyramid shape, using about 40 ladyfingers. 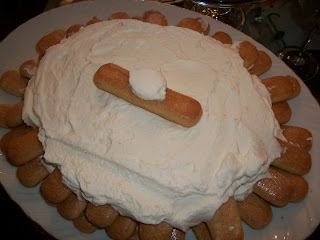 After our grateful glut, we retired to the sofa and put our feet up on the coffee table, stuffed to the gills. Look at the light in that incredible sky! 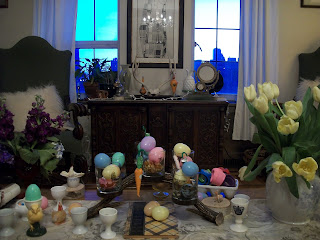 And of course, a spray of yellow tulips. Happy Easter! 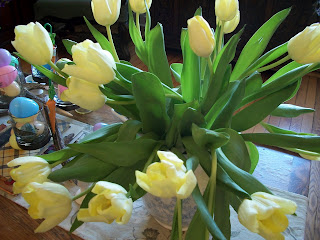 Posted by Peter Sherwood at 2:35 PM