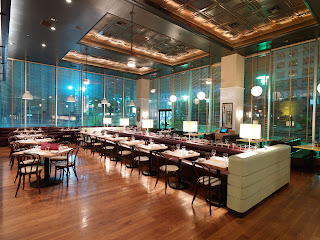 Who’da thunk it? Right in the heart of Penn Plaza, what my dining companion has dubbed as “Ugly Town,” is a delicious plunge amidst the raucous, hurried bunch primed to hop on their respective commuter trains. One might not expect well-executed food a stone’s throw away from a TGI Fridays or a Payless Shoes—but how delicious to be surrounded by a diorama of iconic shots from Fellini’s masterpiece, La Dolce Vita, in tribute to the restaurant‘s home-style Italian cuisine.

At first, while considering wines, I wondered if the roaming map was a warning of things to come. The Vernaccia white from Siena stalled a little but eventually succumbed to the evening as it opened up. My next glass turned toward a cleaner Gavi from the Piemonte region, resonating with a bright melon body. Reds involved an easy drinking Sangiovese with a soft start and luxuriated into a sharper, leathery finish. The Sicilian Nero d’Avola was a robust match for the meal.

The housemade, amazing mozzarella was the marquee-worthy star of the platter we were presented with in a vibrant display.  The dish featured a field of yellow and red vine-fresh tomatoes in quite a collaborative effort, with extra virgin olive oil showered over scorched peppers, purple olives, tongue-y folds of sopressata and invigorating, aromatic basil fronds—it would be disrespectful to suggest that these huge leaves were a mere garnish.

We passed on pizza that appeared on neighboring tables and seemed to be rather pedestrian, venturing instead toward a pasta course that commenced with crescents of semolina gnocchi that were really more like a subtle pyramid of polenta soaking in a buttery truffle fonduta with wild mushrooms and little frills of shredded Parmesan. Cavatelli “malloreddus” represented tradition and arrived perfectly al dente with gentle, homemade sausage, porcini mushrooms and ricotta cheese that further ridiculed us, daring us to devour. Crispy artichokes found a wonderful balance with a pert lemon aioli. Enormously engorged, moist meatballs in tangy pomodoro sauce stunned us, incorporating caramelized onions for sweetness.

Elegantly slinking past dessert cocktails that utilized a lot of gruesome, throat-thickening components such as vanilla vodka, Kahlúa, milk and amaretto, we settled down with a glass of grappa and a cup of mint tea served in an organza purse suitably attired for steeping. Desserts seemed boring in comparison, although we might have sampled the raspberried chocolate truffle mousse. Instead we dabbled with a pleasantly light lemon custard with almonds and wine-poached pears as well as a ricotta cheesecake with a musky balsamic reduction. Had we been merely awaiting a train to take us home, we surely would have stayed and boarded a conveyance later.

First published in part in Next magazine.
Posted by Peter Sherwood at 10:32 AM