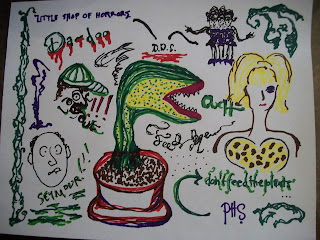 For the first time in the years of my play reading dinners, a gung-ho band of friends and I took on a musical this month, Little Shop of Horrors. I burned the cd and downloaded and emailed copies of the script in preparation. It was all quite hilarious--besides playing my role of Seymour, the hapless nerdy hero, I also had the remote for the cd player (yes, I still have one of those) close at hand to play and pause as we sang over the recording. We had only two scripts and there were just four of us taking over the parts when we probably needed at least three more, but we marched on just the same.

If you are unfamiliar with the 50's pastiche musical that opened in the early 80's Off-Broadway, the movie version with Rick Moranis or the black-and-white Roger Corman film with Jack Nicholson in his first movie role, here's the basic plot--down-on-his-luck Seymour works in Mushnik's flower shop on Skid Row and fortune intervenes when he discovers a remarkable Venus Fly Trap-type plant which brings him fame and fortune. Things start to go horribly awry when Seymour discovers the murderous plant thrives on blood and eventually begins talking to him, while growing to epic proportions.

I created a creepy plant of my own as the setting for the dinner table, using a large cabbage and wilted red lettuce leaves situated on a footed cake stand. I also created extending "vines" by weaving watercress along the table. Sheet music from the show created a runner upon which everything sat. 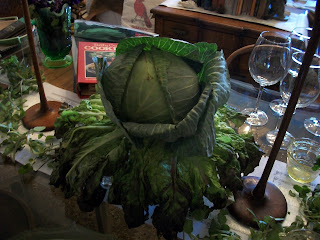 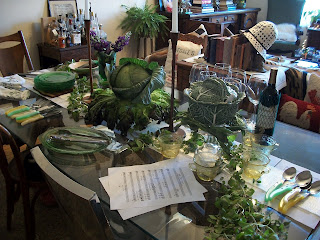 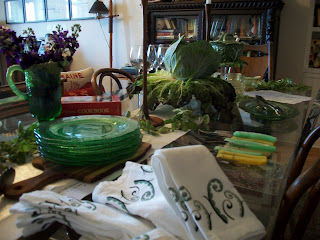 Taking a cue from the botanical bent of the show, I served dolmas, rice-filled grape leaves as an appetizer and an appropriately green, chilled soup with peas and asparagus in an old cabbage-shaped tureen with withered sorrel wrapped around the base. Everybody went wild for my soup! 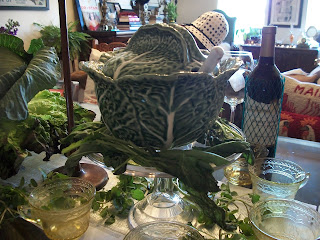 Baby (who played Mr. Mushnik to great effect) made stuffed vegetarian cabbage with zucchini bread for a surprising, delicious entree during intermission. We nibbled on some Green & Black's dark chocolate bars infused with peppermint oil for a dessert snack afterwards.

I drew the montage picture above!

Tonight's Menu
Dolmas (stuffed cabbage leaves from Fresh Direct)
Light Spring Soup with Peas and Asparagus -- I did not use rice as suggested, and served it chilled instead
Stuffed Cabbage (see Baby's recipe below)
Green & Black's Organic Dark Chocolate and Peppermint Bars

Method
Remove outer leaves and core the cabbage. Put in boiling water for 45 minutes, until leaves are easily removed.
While cabbage is boiling, make the sauce: saute onion until translucent, add garlic and stir for 1 minute. Cook down tomatoes with two cups of water, simmering for about 15 minutes. Add salt, pepper, Chinese Five-Spice Powder. Add zucchini bread and stir into sauce until mixed, add honey and lemon juice and simmer over low heat for 15 minutes.
Take cabbage out of water and let cool for 20 minutes.
While cabbage is cooling, heat oven to 350 degrees and make the filling by mixing all the other ingredients together with hands. Put about two tablespoons of filling at the base of each leaf when ready. Roll tightly, bringing in sides as you go. Repeat, placing each little bundle tightly in a Pyrex baking dish. Top with sauce, cover and put in oven for 45 minutes to an hour.

Posted by Peter Sherwood at 8:48 AM