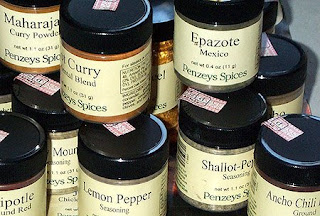 It does seem a little strange to me that there was a time when I didn't know about shallots, because I use them all the time now, when in need of a more rarefied onion, or when I make Michael Lomonaco's Shallot-Champagne Vinaigrette, which I often do. But back when I was in high school, the word shallot first jumped out at me somewhere around my sophmore year I think, as an ingredient listed on a tin of escargots, to be minced, and then prepared with butter and parsley in a bubbling broth. I vividly remember the night my father first brought home the striated caramel and ivory colored shells (which we still use), to be filled with the plump escargots and how my mother subsequently rushed out to the supermarket to find something called shallots.

My father got a Purple Heart in WWII and has otherwise always had an air of adventure around him, with a touch of curiosity that he has handed down to me. Like a boy who brings home a stray cat, he used to come home with such preposterousness as pomegranates or stalks of sugar cane (remember, this was the '70's in New Hampshire, we didn't know from the currently ubiquitous Pom brands or Mojitos) so we could try them and tell him what we thought. He was always encouraging me to want to know things, to try things, unlike children today who are enabled to eat only chicken fingers while texting their BFF's.

The Old Man introduced me to oysters and escargots in Canada, Duck a l'Orange in New York, and bought my first suit and pair of wingtips before I went to school abroad in London just in case I might need to appear presentable. And you know what? I did need to appear presentable; one carefree college day my friends and I skipped class to have an afternoon tea at The Ritz. We were all only about 20 years old!

At 82 years old, my father still calls himself a farmer, indeed he was brought up on a farm, but frankly he is the finest, mannered gentleman I've ever known, with the soul of an artist, his stock and trade, while at it.

Having taken the long way around, although I do think it is important to cite one's references, let's get back to the idea of the shallot and the Shallot-Pepper blend with dried tarragon that can turn a Hollandaise into a Bearnaise or add new life to Easy Mac. It's just waiting at Penzey's, purveyor of the best spices, and can be collected easily enough from the stand in Grand Central Station or by catalog, and online.

So what do I do, now that Shallot-Pepper has got me reminiscing like Proust's madeleines?

Collect my thoughts, cluttered memories and go to bed, I suppose.

At the end of an ordinary day, it's somewhat of a mix between truth and imagination that persists.

Posted by Peter Sherwood at 1:44 AM