An Afternoon with A & P 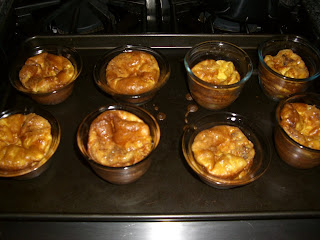 Baby's father (A) was coming to town with his wife (P), to meet up with her daughter, her daughter's husband and their two children. It was all very last minute and as we had just thrown our Derby party, we wanted to serve something easy but elegant for family, 'natch. I think we quite succeeded, and simply so as well.

Julia Child's Quiche Lorraine (The Eighty-seventh Show) with crumbled fried bacon, eggs and heavy cream was an excellent starter, inverted on tea cup plates, which we chose to serve cold and without a crust. We also used less cream and dispensed with the chilled butter chips as the recipe encourages, we merely rubbed the ramekins with softened butter. All told, it was easy as pie and delicious as quiche.

I'm a huge fan of clever leftovers; the hearty remains of the Southern Shrimp from the Derby with a fresh batch of instant grits made their way onto comfortable spoons again to the delight of a new audience.

We sat with sumptuous crab cakes poised on a shallow pool of horseradish sauce before getting down to business. The medium rare grilled Filet Mignon entree was served with a side of scrumptious lobster mashed potatoes and asparagus, roasted with lemon zest, and lemon- and oregano-infused oils.

Homemade thyme-infused peach sorbet quite finished us off.

Posted by Peter Sherwood at 9:33 PM